How I Learned to Climb Real Rocks 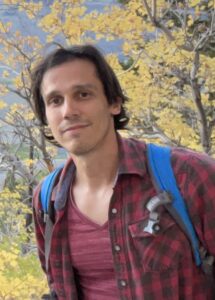 Climbing, for me, has become a way of life. After developing my skills in a gym for several years, I realized what I really wanted was to climb outside…on tall walls…on real rocks. But I had no idea what leading outdoors entailed, so my climbing partner suggested we take a course.

I had reservations about paying for formal instruction. Like many climbers, I believed it was unnecessary. Yet, I saw potential in learning from a teacher with years of climbing experience and realized that advice and demonstration from a certiﬁed instructor would be something the average climber could not oﬀer.

The morning of our gym-to-crag class, we swerved into a small parking area oﬀ of Illinois Route 100 (aka Great River Road), both of us excited and terriﬁed. A white van with a giant Vertical Voyages logo on the side sat in the lot, its trunk open and overﬂowing with climbing equipment.

We hopped out of the car into the frigid December air and were greeted by our guide, Jon. He was already wearing his helmet and harness which was decked out in draws and devices dangling from its side loops.

During the short approach to the crag, we discussed the risks involved with cleaning and rappelling. Cleaning is the process of removing gear from a route when a climber is ready to move on to a new route. Jon informed us that many climbing accidents happen at the top of a route when making that transition. Here, a mistake can be fatal.

Soon we arrived at the Meadow Wall, a short and slabby limestone crag with a diagonal crack across its face. Jon pointed to the ground where a bolted boulder lay, a monument to the importance of skilled route setting. Once the top of a nearby route, it was safely removed and now it served as practice anchors — a place to rehearse the cleaning process.

While we practiced on the ground, another group of climbers set up nearby with the intention of teaching their friend how to clean a route. We watched an awkward situation unfold: the climber stalled at the anchors and seemed lost on how to proceed with the rappel. When the belayer shouted up directions, the climber snapped back arrogantly. After several tense minutes of silence, he was eventually lowered oﬀ the rings.

What a timely illustration of the diﬀerence between two ways of learning. I imagined myself as the frustrated climber struggling to work through the cleaning process, growing impatient and feeling embarrassed while my belayer shouted instructions.

The moment taught me an important lesson — transitioning from gym to crag is not a process to be taken lightly. The gravity of the situation demands preparation, communication, and humility. Any doubts I may have had about receiving formal instruction dissolved.

Climbing Outside: My First Lead

After suﬃcient practice on the ground anchor, we were ready to jump on the wall. I had never led outside on real rock. Even a relatively easy route felt intimidating. I tied in, shook oﬀ the fear, and began to climb. I struggled up a route well below my indoor climbing grade, breathing heavily and mentally coaxing myself to keep moving.

While my experience in the gym was valuable, it did not prepare me for the elements and head games I encountered outside. The cold limestone numbed my ﬁngers. The draws weighed heavy on my harness. But the most prevalent obstacle was locating holds. I thought of Jon’s instruction on climbing techniques — trust your eyes, they will naturally look to points for your feet and hands. Rather than hesitating and shopping for holds, trust these initial points and keep moving.

Once I reached the top, I clipped in, did a take, and sighed in relief. I clipped in my personal anchor and called down for slack to test the system. Suddenly, I blanked. What is my next move!? How do I know the gear will hold me!? I panicked.

Jon climbed the adjacent route to oﬀer advice. He walked me through the steps again and helped build my conﬁdence in the gear, in the process, and in myself. Simple instructions like remember to breathe, along with his presence on the wall, was the reassurance I needed to get past fear and hesitation.

Learning From a Pro: Climb Responsibly

Professional rock climbing instruction oﬀers insights and nuances that well-meaning and even skilled climbing friends simply cannot. Instructors have a wealth of experience training others. They oﬀer various methods, reasoning behind those methods, and vivid anecdotes to support their lessons. Ultimately, qualiﬁed instruction teaches us to be more responsible and well-rounded climbers.

While some climbers dismiss the need for formal training, I am immensely grateful for the gym-to-crag class that day. Jon’s instruction instilled foundational practices I continue to apply today. We learned to construct a habit of best practices, to consciously adhere to and understand the processes involved, and to respect the inherent risks of rock climbing in the wild.

Several months after the class, I reconnected with Jon and began working as an assistant instructor for Vertical Voyages. The gym-to-crag course taught me much, but there is still more to learn, and now I have the opportunity to work with a great teacher. My ambition is to become an AMGA Single Pitch Instructor and beyond.